I have nearly a week and a half off from work and I’ll be spending most of it close to home. This isn’t your typical vacation series as you’ve read about in the past. I’m writing to you on the floor of my new apartment after a long but great weekend of shopping and building.

About a week ago, I moved from my 2-bedroom apartment that I shared with my ex-fiancé into a 1-bedroom pad. I’ve lived alone once before briefly but I had him as a frequent visitor and house guest so this really is my very first by-myself apartment. And it’s taking some getting used to. But that’s a post for another day. 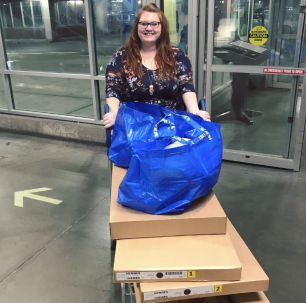 When I started the moving process, I purged a lot of items and about half of our furnishings went to him which is totes cool with me. I had most of my shelves, tables, etc for years and years. A new chapter calls for a few new things, right? What better way to replenish than a trip to IKEA with my mom!

A detailed list with measurements in hand, we tackled the massive do-it-yourself store in about 4 hours. I think that’s probably the ushe to those that don’t live in the Bloomington area. I didn’t get everything on my list but Amazon is a friend of mine. We also hit up the mall and a few stores outside of it. I found a new foundation (that I LOVE!), my mom bought a couple pairs of shoes and we both hit up Bath & Body Works in Albertsville, like one does. (The “S” is on purpose). 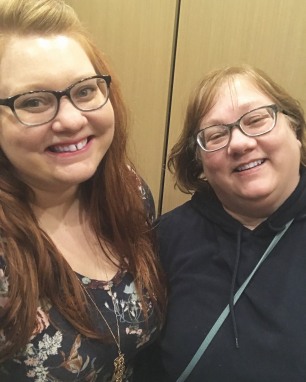 The trip to the cities was short and we were both exhausted by the time we hit the hay Sunday night. (My mom had an extra 2+ hours to drive home once we got back to Fargo.) I feel so lucky and incredibly blessed to have such a great relationship with my mom. It amazes me to see how many families don’t have that. Counting my blessings more than ever lately.

Today (Monday), was put-stuff-together-day. I know this probably sounds weak and a little anti-feminist but I’ve never, ever put anything together. Not that I don’t know how or am not capable of doing so, but I’d always had someone to do it, so what’s the point? A new skill is the point, I know. IKEA furniture is surprisingly incredibly easy to put together and I felt pretty awesome when I had completed everything far sooner than I had expected. For the first time.. probably ever.. I understood what the Power of a Woman meant. I may have even done the Wonder Woman power pose!

The only hiccup I had was my dresser. The one item I really really need! There were 3 boxes, of which I grabbed. But I grabbed 2 correct boxes and 1 incorrect box. As I’m writing you, I’m on minute 86 of the estimated 102 minute hold. We’ll see what happens, I guess. MEH.

Anyway, this has been a great 3-day start to my first Staycation. Miss Emma May comes tomorrow for an entire week! Stay tuned!