I thought I’d share a little light reading before tonight’s Republican Debate. I’ve never really been much interested in politics. I try to have a general idea of world news but the news always seems to be filled with war this, nuclear that, Middle East what?

I also have a hard time believing that I can make a change. I am active as a voter and put an alright effort into researching the running candidates but I’m never going to be in a position to have a political argument and have the facts to back me up. It just doesn’t interest me enough to know.

With that being said, I do follow closely on the topics that matter to me. While I’m sure the war and the nuclear jargon and all this boring jazz is what I’m supposed to focus on; I don’t bother. I can’t keep my mind clear enough to hardly get through an article about it. Believe me I’ve tried.

Even though I’m a novice in the political world — I do think it is important to have an idea of what all the running candidates stand for. Even though I typically have more liberal beliefs; I give everyone a chance in the power to win me over. 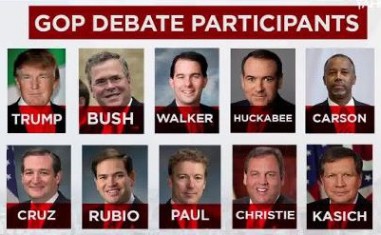 If you have time before tonight’s debate, check out a few of the Q & A’s theSkimm sent me yesterday. This was a great read from theSkimm because they talk in my language. Easy to read and straight to the point. However, Donald didn’t bother submitting anything to theSkimm so I guess he’s off my list.

But not really. He’s a sleaze bag and that’s not a fact I obtained from anywhere; it’s just a feeling and I trust feelings.