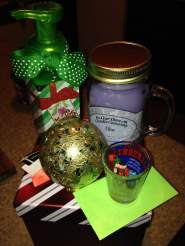 Today was our Employee Appreciation slash Secret Santa Exchange Party. I got pretty lucky. “Santa” dropped off a few small gifts during the week which was a pleasant surprise each morning. Tonight, at our party, we snacked on some delicious food from a local grocer, played a little Tenzie, and opened our Secret Santa gifts. I received a candle (lilac, my favorite!) and beautiful Christmas ornament along with a “new to town” Paul Bunyan shot glass and magnet! An added surprise from our employer was a gift card for groceries which definitely comes in handy this time of the year!

And since my giftee was so excited about their Christmas gift, I decided to post it as well because it was really fun to make. I’m one of the newest employees to the office so I don’t really know anyone too well. I had to do a little “snooping” in order to find something really good. And based on my research, this was the perfect fit! I knew it was cool but I was actually surprised by his reaction and I quote: “This is kick-ass!” The photo to the right doesn’t do it justice but you’ll get the idea.

Does your employer or group of co-workers host a Secret Santa Exchange? I’d love to hear what you gifted and were given!

The old me would have binge ate all day today. But the new me has easily stuck to the healthy food that I purposely brought to work to eat. I won’t go into any kind of detail about why but today was a very eventful and stressful day.

As you may or may not know, I made a very serious choice on June 7th and that choice was to get healthy or to die. I’ve been doing very well since then. A couple of bumps like with any choice to get healthy but I’m officially down 22.6 pounds and counting. I hope to hit 25 by my next weigh in.

And really, it still is. The only difference between then and now is that I can control it. When I’m stressed or bored or angry or nothing…I don’t think about eating. Don’t get me wrong, it still happens sometimes. Weekends are the toughest. But I’ve gained some self-control.

3 months ago if I had a morning like today, I would have went to Hardees for lunch and then stopped at Holiday before my break was over to get a pop and a candy bar. After the afternoon I’ve had, I would have hit up McDonald’s on the way home and stuff my face before getting out of the parking to have supper with my boyfriend an hour later. Which also involved eating out about 75% of the time.

So what am I going to do to deal with today’s stress levels? I’m going to go for a long walk tonight. I wish I could go now actually. My energy is pumping and I want to be moving. I want to sweat out the annoyances and responsibilities of the day rather than hold them in by giving my heart a reason to clock out once it hits a pool of grease.

I’m no where near perfect in my choices or my physique. Imagining my goal is too hard to do at this point because it’s so far away but after a day like today, I’ve really been able to see just how far I really have come. I don’t always see progress in the mirror or even on the scale but noticing progress of the mind is one of the best signs of a positive journey that I’ve gotten to experience this far.

I know you hear this all the time by anyone that’s ever lost weight in the history of fat people but seriously, if I can make serious progress..so can you. You’re worth it.

We have a little thing going around work for the community to get to know us better because, after all, we are a newspaper. So, if we wanted we could fill out a short survey and submit a photo. Yesterday, my summary was featured. Give it a thumbs up and share if you’d like! Check it out here! #WeAreTheHerald

It’s rare when some single person somewhere on this planet can actually relate to that something going on in your life. As each day in my life goes by, I’m finding that I realize that more and more. It’s depressing really. Even if two people or an entire family are going through the same “something” each individual can’t possibly feel the same as the one next to them.

There are many times that I’ve wanted to, and sometimes I do call for a pity party. I just want someone to understand what I’m going through or expect someone to empathize with me when even I, myself have admitted to have a lack of said empathy. I find comfort in having someone to talk to but once I reflect on a conversation had or advice given, I often find myself in stuck in their shoes that don’t fit me. Why did they say what they said? Does it make sense? Sure, it might but why? They have no idea what is actually happening. What’s going on. What the situation actually is. How I really feel. They aren’t me, how could they?

For the sake of the privacy of those around me, I won’t go into personal details but I myself have been going through something for some time now. In a twisted, clouded way one might say that I signed up for it. I could have walked away from an inevitable hurdle too high for an Olympian to jump over but something deep inside my soul urged me to run toward it not away from it. The consequence in doing so has lead me down a path of putting off certain aspects of my life.

I’ve made a promise to myself though, specifically in the year that we are in. At the beginning of the New Year, I vowed to live my life and pursue even the smallest of dreams. Two very simple things that I’ve willingly put on the back burner for nearly two years. A lot of people don’t understand and anyone that I’ve met within these two years hasn’t had the opportunity to even understand because I don’t talk about it. Not that anyone might actually care but for arguments sake, lets just assume they do.

I found out very early down this path that I chose that it does no good to release your emotions at the drop of a dime. It leads to “friends” and family’s free reign to run their mouths on a topic that they just don’t understand. Not only do we all not have the exact experiences as each other but we, as a human race, are quick to judge before the end of a sentence is even completed.

I’ve been busting my butt all week at work to keep up with the workload and I can definitely tell that I’m working hard. Don’t get me wrong, I always put everything I have into what I do on the work front but we’ve just been busier than usual and let me tell you, it’s noticeable!

All is well in the world though. I was just talking with a co-worker today and we were chit-chatting about how we actually enjoy coming to work. There are many times throughout our lives where every single one of us has probably faced the “I don’t want to go to work today” morning dilemma and happily, neither of us has had to ever say that working here.

I have pretty stressful days between this and that and over there and oh yeah that too but I love it. This job is challenging and exciting. It pushes me outside of my comfort zone at times and urges me to learn more and know more. Having a good atmosphere to work is in definitely key when it comes to enjoying what you do and I’m happy to say that I have found that.

I have an ongoing bucket list that I plan on posting sometime soon. I think it might be a separate page kind of like the About Me and Contact Info pages. It’ll be things that I’ve been jotting down for a few years. Sadly, I have more on my bucket list ‘to do’ than are already done but one day at a time, right? Is that sad or is that hopeful? I guess it would be both gloomy and gratifying to actually have everything checked off that list.

What’s on your bucket list? A dream career path or place to visit? Where would you build your perfect home if you could? What’s your “bucket” timeline for the next big step in your life? Marriage, kids, bachelor for life?

That’s about all I have time for right now. I’m on the way home to tend to a 6′ 4″ beast of a man that’s picked up my sickness from last week. Too-da-loo.